Macadamia is a type of evergreen tree with 9 different species that make up this Proteaceae genus. Out of the nine, only two of them are actually bearing nuts that are a viable food source to people. Other variations of the fruit are inedible and in some cases even poisonous due to their high levels of cyanogenic glycosides. The nuts themselves are encompassed by a very hard exterior coating, and they are usually paired up inside this coating. In fact, these shells are so tough that humans really only share this food source with one other animal, the macaw.

Many people now associate them with Hawaii, as they have thrived in this region for well over a century now. But originally they were indigenous predominantly in Australia. More specifically, they grow in the rainforests shared by Queensland and New South Wales. The latter was the first to commercialize the tree into an orchard in the 1880s. It was also during this time that Hawaii had received its first seeds of the nut bearing plant. And as a result, they put the Macadamia nut on the international map so to speak. Up until recent years Hawaii was also the biggest trader of the nut internationally. A shift in the industry now has Australia leading this pack.

This plant’s seeds have gone by many different names. Macadamia nuts get their name from a man John Macadam who first described the plant in academic form. Aborigines in certain parts of Australia whom ate these nuts for thousands of years before referred to them as gyndl. Early settlers of Europeans had then spun the name into kindal. And yet still today, some Queensland locals often refer to them as bauple nuts simply because they grew abundantly near Mount Bauple. So this world renowned nut has certainly seen its share of different names.

The macadamia nut oil has also found its foothold in several markets, and some are growing rapidly. In simple terms, the oil is extract from cold pressing the macadamia nuts. The oil is pulled from the nuts of the same two macadamia trees that are used for commercially growing the fruit. Like the nuts, the macadamia oil has many different ways and recipes in which it used as well. 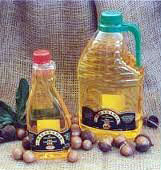